The Council Bluffs Water Works is required by law to provide new customers, prior to or at the time service begins, a copy of the most recent Annual Drinking Water Quality Report. The water provided by this system is in compliance with the requirements of the Safe Drinking Water Act and is safe to drink.

The purification process begins as water enters the intake structure through bar screens and traveling screens, of ½ inch mesh. These screens prevent large and small debris from entering the intake that could damage the pumps. The water is pumped to preliminary settling basins by any combination of four vertical turbine pumps. At the intake a cationic polyelectrolyte coagulant is introduce to the water as needed to enhance the settling of silt, clay and other particles in the water.

The velocity of water slows through two preliminary settling basins allowing gravity to settle the heavier particles to the bottom. The accumulated particles form a layer of mud on the sloped bottom which is removed from the basin by mechanical scrappers. The settled water flows over a weir into a collection launder or trough and then piped to the main Purification Plant for complete treatment.

The water flows into two rapid lift mixers that thoroughly mix water treatment chemicals, including quick lime and ferric sulfate, where coagulation takes place. After rapid mixing water is diverted to two independent treatment trains or stages that includes flocculation and clarification. Approximately 60 to 70% of the water goes into the first stage mixer. At the first stage rapid mixer quick lime is added to raise the pH of the water to 11.0 or higher. The high pH water causes calcium and magnesium, both naturally occurring elements that cause water hardness, to precipitate from the water. As the water enters the flocculation basin large paddles gently agitate the water causing magnesium and calcium to form larger floc particles and complete the chemical reaction. The water then flows into the first stage clarifier basin. The calcium and magnesium floc that forms settles to the bottom of the clarifier and mechanical scrappers remove the accumulated solids.

A flume directs the clarified water to eight rapid media filters that remove any remaining particles. The filters have an under drain system covered by graded gravel, several inches of fine sand, topped with over two feet of granular activated carbon. The granular activated carbon not only filters but also removes taste and odors and other organic compounds by adsorption.

The filtered water is collected into a large clearwell where a small amount of chorine is added as a disinfectant to ensure the water is free of any pathogenic organisms including protozoa, bacteria and viruses.

Finally, a small amount of sodium silico-fluoride is added to the water to maintain an optimal concentration of 1.0 -1.2 mg/l. Studies have shown that the addition of fluoride reduces dental caries by up to 60%.

Purified finished water is now safe for human consumption and is distributed to our customers.

Our Plant Operators and Laboratory Technician sample and analyze our water throughout the treatment process and distribution system around the clock to ensure its safety. Also, samples of our drinking water are sent to a state approved laboratory to be tested for more than 80 contaminants. There have been no contaminants detected in our drinking water that have exceeded maximum levels as established by the Iowa Department of Resources or the United States Environmental Protection Agency. 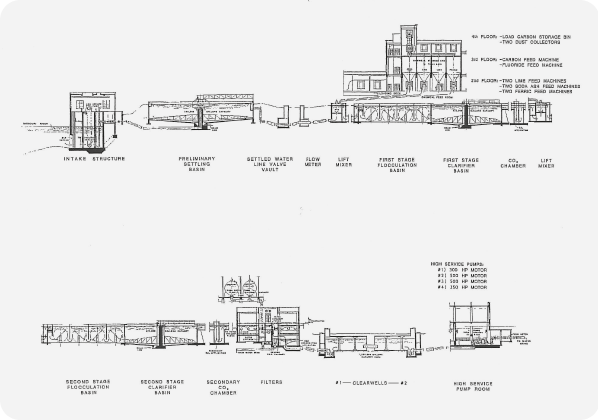